The Business School’s Advisory Board has a pivotal role to play when it comes to the Strategy and Development of the operations and it ensures that the highest academic standards are maintained.

The Advisory Board membership for 2022-23 is as follows:

The President of the Business School's Advisory Board 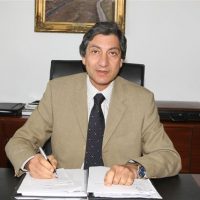 Mr. Glafkos Mavros studied Economics in the United Kingdom and is a holder of a BSc in Economics from London University where he specialised in the field of Banking Institutions and Finance. He also holds an MBA.

From 1975 – 1978 he worked as a Corporate Financial Analyst with First Boston Corporation, an American Investment Bank with specialisation in Eurobonds and syndicated loans.

In January 2008 he was upgraded to General Manager, responsible for Group Business Development, and he has also undertaken the Management of the Bank’s expansion abroad including the setting up of a subsidiary Bank in Russia.

He was a Member of the Board of Directors of Pancyprian Insurance Co, Hellenic Alico Life, LLC CB Hellenic Bank (Russia subsidiary bank).

He is also a member in a number of the Bank’s top management committees and its affiliated companies.

In September 2012 he was elected as President of our Business School’s Advisory Board.

Foreword by the President

More than 44 successful years have passed since 1978 when CIM, the first Business School in Cyprus was set up to promote and service the science of marketing globally. Through the rigorous and challenging programmes developed over the years CIM has focused on creating value in education, and has been recognised as the major educational centre for the development and promotion of marketing in the most practical and efficient way.

More recently the Institute has expanded its educational horizon through wider multifaceted programmes providing Diplomas, Bachelor degrees and Masters Programmes of its own as well as academic programmes in collaboration with carefully selected prestigious European Institutes and universities.

Under the present unprecedented economic constraints that most of the world is faced with, and the ever increasingly competitive job environment, education and knowledge are the only secure shields to job continuity and the most valuable safeguard for a successful future career.

CIM, with its four decades  of successful operation, provides students with valuable educational choices and opportunities. Ever since our establishment the Institute has been teaching in-career adults and attracts all those who have the determination and will to enhance their knowledge and personal fulfilment further.

Based on our successful history of combining theory and practice and building on our experience we envisage becoming the leading business school in Cyprus through a programme of refining and updating our graduate and undergraduate programmes to reflect the current economic and business environment, and at the same time taking advantage of the knowledge and experience of our professional ties with leading European educational institutes.

At CIM we are characterised by our high ambitions and unique goals in the years to come; we want to be distinguished and recognised as the continent-wide business school with international recognition for its creative programmes and the proven success of its academic achievements. Join us and become part of our success.